Editor’s Note: With so much market volatility, stay on top of daily news! Get caught up in minutes with our speedy summary of today’s must-read news and expert opinions. Sign up here!

(Kitco News) – The top smart contract platform Ethereum (ETH) has seen a mixed bag of developments over the past year as the network finally transitioned from proof-of-work (PoW) to proof-of-stake (PoS) while simultaneously seeing its price fall below the previous cycle’s high, which had never happened before.

Thanks in part to its transition to PoS, along with the fact that it supports the largest number of decentralized applications (dApps), the Ethereum network processed 338% more transactions than the Bitcoin (BTC) network according to data from Nasdaq and Ycharts shared on Reddit on Jan. 2.

The data shows that over the course of 2022, the average daily transaction count on the Ethereum network was 1,119,292, compared to 255,086 for Bitcoin. Transactions on Ethereum also showed more volatility when compared to Bitcoin, which showed a “clear periodic pattern,” according to Reddit user reddito321. 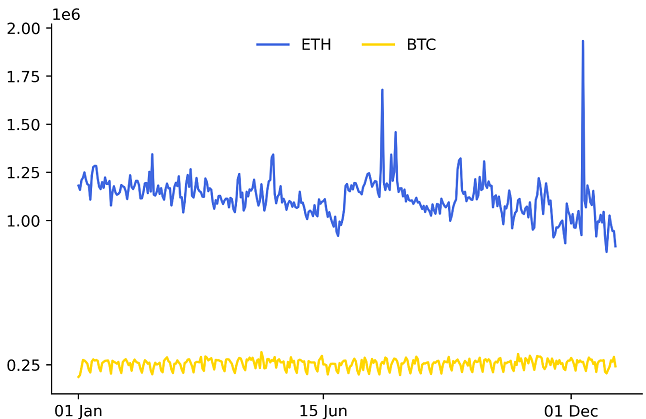 In total, there were 408,541,610 transactions on the Ethereum network in 2022 while Bitcoin saw a total of 93,106,378 BTC transactions. These findings are not unexpected as the number of smart contracts and non-fungible token projects hosted on Ethereum give it a larger number of use cases.

The popularity of Ethereum becomes even more apparent when layer-2 (L2) transactions are thrown into the mix. Data from L2beat shows that the number of L2 transactions per second actually surpassed the number of transactions on Ethereum layer 1 (L1) in mid-October and remained higher for a vast majority of the time since.

Another factor helping to boost usage for the top altcoin is its upcoming Shanghai hard fork, which is scheduled to occur in March. Following this upgrade, staked Ether (stETH) will be able to be withdrawn from the Ethereum Beacon chain, which will help reduce the risk involved in staking.

In anticipation of this event, the tokens for several platforms that facilitate Ether staking – including Lido DAO (LDO) and Stakewise (SWISE) – have seen their prices stage double-digit rallies over the past week.

Biggest liquid staking gainers over the past week. Source: CoinMarketCap

Data from Defi Llama also shows that Ethereum remains the top protocol as measured by total value locked (TVL), with $23.06 billion worth of value locked on the various dApps hosted on the network.

And with data from Messari showing that Ether has a staking ratio of 14%, which is the lowest among layer 1 coins, there is ample room for growth when it comes to the ether stake rate, which could help provide a boost in price if more tokens are locked on the network.

One dark spot that remains for both Ethereum and Bitcoin has been the performance of their respective Grayscale Trust products, which have struggled to hold their value compared to actual BTC and ETH.

Data from Coinglass shows that the discount for the Grayscale Ethereum Trust (ETHE), which is a traditional investment vehicle that provides institutional investors with passive exposure to the price of Ether, is currently at -59.3%, its lowest level in history.

ETHE’s discount to net asset value has been declining since the end of 2020 but saw an acceleration in Q4 of 2022 as the FTX fallout spread. In June 2020, the premium for ETHE hit a high of nearly 950%, which further highlights the decline in popularity that the product has experienced over the past two and a half years.

In comparison, the Grayscale Bitcoin Trust (GBTC) is currently trading at a discount of 45.17%, which is better than the discount for Ether but still represents a significant divergence from the price of actual BTC.

Moving forward, the performance of the Grayscale Trust products is likely to depend on a number of factors including the ability of the crypto market to bounce back following its disastrous performance in 2022 and whether Ether and Bitcoin exchange-traded funds (ETFs) will be approved for listing in the U.S. market.