Litecoin [LTC] and other top cryptocurrencies have been overshadowed by the Ethereum [ETH] Merge for the last few weeks. Interestingly, LTC may have actually benefited from the Merge from a hashrate perspective.

An inspection of Litecoin’s hash rate reveals a sharp uptick in the first 10 days of September. Its hash rate grew from as low as 390.93 TH/S on 31 August and peaked at 527 TH/S on 9 September.

The timing of Litecoin’s hash rate spike aligns with the miner exodus from Ethereum. Some of the miners may have flowed into LTC miner pools during this time, thus the sudden hash rate boost.

Although the rise in hashrate represented an inflow of miners, it wasn’t linked to the Merge. However, the hashrate may have been influenced by LTC’s price action. Upon considering Litecoin’s hashrate especially in the last six months, it can be seen that its fluctuations were in tandem with LTC’s price action. 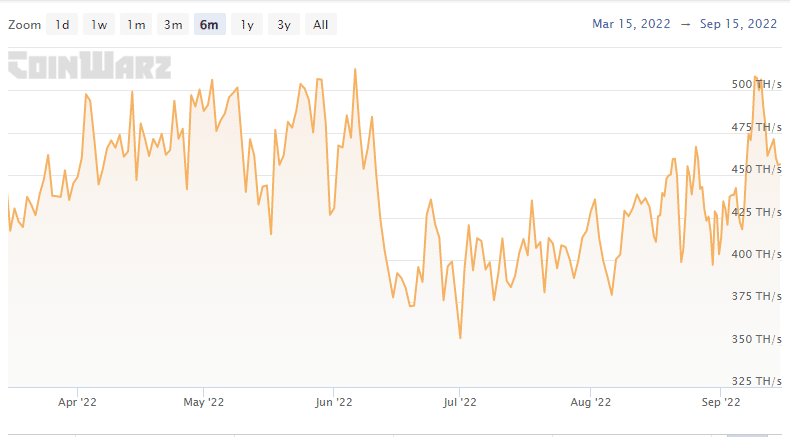 LTC’s hash rate tanked sharply in June from its 2022 peak above 512 TH/S to as low as 353.75 TH/S by 1 July. This was around the same time that the crypto market witnessed a crash. A drop in miner profitability might have been the driving force behind the crash.

The April-June market crash may have also pushed prices so low that many miners were out of profit. Thus, it made sense for miners to halt operations if their costs outweighed their mining revenue.

Litecoin’s hashrate also registered a sharp drop in the last five days. This aligned with LTC’s price drop since this period but a 10% drop is hardly enough to warrant a major hashrate change. The only way such an outcome makes sense is if an increased miner count resulted in more sensitivity to price changes. Shrinking transaction volumes would also result in lower miner profitability.

In addition to the data mentioned above, LTC’s transaction volume dropped ominously in the last five days. The same time that the price registered a pullback.

1. Outliers
2. Deep Work
3. Meditations
4. Atomic Habits
5. Rich Dad Poor Dad
6. The 48 Laws Of Power
7. The millionaire next door
8. The Psychology of Money
9. Man's search for meaning
10. How to Win Friends and Influence People

What else to add?