CES 2022 was jam packed with several days’ worth of talks and discussions, from female leadership in technology to the viability of NFTs. One talk, however, seemed most prominent as both developers and media in the video game industry sigh in frustration at the mere thought: blockchain games.

That’s right, blockchain technology is being integrated and utilized in gaming to serve several use cases, some interesting, others far more negative than their creators may realize. On the surface, the tech is initially being put to some good use, especially for those who are already knowledgeable and fully into the cryptocurrency sphere.

On the stage discussing these endeavors were Desiree Dickerson, CEO and Co-Founder of THNDR, and Vatsal Bhardwaj, Chief Product Officer of Skillz. Their resumes speak for themselves and their industry knowledge, both on blockchain and gaming, are expert-level.

In terms of integrating these two industries together in interesting ways, the executives vie to bring real world value and speculative aspects of crypto to gaming parameters. It starts with “adding value through real-world applications” through an intelligent use of in-game economies – that is winning Bitcoin (or mining it) via mobile gaming. 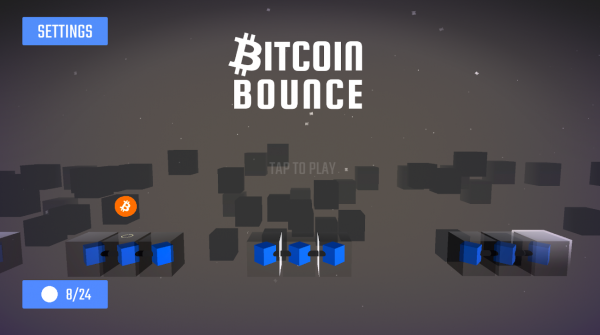 This could and, generally, has already led to the purchase of real-world items with gaming-rewarded cryptocurrency. Dickerson spoke of one specific example wherein a player used mined crypto from their game to purchase a cheeseburger in El Salvador.

Of course, this requires players to have already bought into and have an in-depth knowledge of crypto before proceeding, otherwise what’s the point? To make acceptance easier, there is no buy-in, as these Bitcoin mining games are free-to-play and serve as a jumping-off point for users to try Bitcoin as well as gain it on a simple mobile-based platform.

Previously, as Bhardwaj notes, games never had a true form of ownership before. In his own words he relates, “If I’m playing a PvP game and I owned a sword or an axe, there was no concept of ownership and there was no way for me to use it outside of the game.” Now, with in-game bitcoin mining, ownership takes new form.

These are valuable touch points on a topic that is, for the most part, frowned upon. With these mobile crypto mining games, small transactions can suddenly matter even more. A mere 50 cents can go much further thanks to Bitcoin, so posits both speakers. Materializing the Blockchain in gaming leaves open a doorway for innumerable opportunities, including revolutionized esports, metaverse applications, and the big one: NFTs.

While mobile esports isn’t at its tipping point just yet, there are several ways crypto mining mobile games can better the esports scene. Main among these improvements is raising the stakes for tournament prize pools with Bitcoin rewards either on top or on the whole, totaling millions in winnings.

Skillz itself has made it a mission to democratize esports by attempting to bring the scene to everyone. The company intends to make esports easier for everyone to join in through free mobile gaming that can be streamed over cloud interfaces. “…whether it’s a mom, a grandparent, a college student, or a professional to just pick it up on their phone, and if they have five minutes, they can pick a competition and jump right in and play the game,” says Bhardwaj.

The ideas, of course, branch off into the metaverse, wherein Tim Sweeney’s Unreal Engine and Fortnite reign supreme. With virtual meetings now becoming ever more commonplace, developers are seeking to redefine the notion of a digital shared space, of which can be expanded into the physical world through VR and AR-embedded objects.

Dickerson points out that a spectrum of the metaverse is already here, as exemplified by “Animal Crossing hangouts,” as well as Fortnite. What it comes down to for games and esports integrations is allowing for up to and over 20 million players in one world, as this is the most difficult aspect for local graphics and rendering.

No conversation on the metaverse can end without a quick look into the viability of NFTs. Bridging these crypto-based artifacts into gaming has, for the past several months, not been met well by media, fans, and developers alike in the gaming sphere. It’s for good reason, though, as microtransactions have for the longest plagued the industry, and NFTs could, in essence, become the worst, boss-level form of MXTs.

Jason Schreier of Bloomberg notes that NFTs and cryptocurrency itself are “plagued with scams,” and tend to “leave a lot of people holding the bag.” In his recent newsletter piece, titled “These are the Big Questions Facing the Video Game Industry in 2022,” he highlights the profitability behind NFTs as a key driver for big-name publishers to pursue the avenue. “There’s a prevalent suspicion that we’re looking at one big house of cards, except the cards are cartoon monkeys with lip rings,” Schreier aptly remarks.

But both Dickerson and Bhardwaj see potential, at least for their titles, as NFTs blended with the metaverse could do wonders for blockchain enhanced gaming. This could mean organized assets on the blockchain for increased accessibility to everyone for creative possibilities, thus empowering creators for paid work.

From a game design standpoint, however, NFT integration would make games more expensive to play and not all NFTs would be adopted in the first place. As it stands currently, more than most players are holding on to their crypto, thus increasing demand to some degree. But NFTs and blockchain applications may well find their home in triple-a gaming as both spaces evolve, whether fans like it or not.

ⓒ 2021 TECHTIMES.com All rights reserved. Do not reproduce without permission.